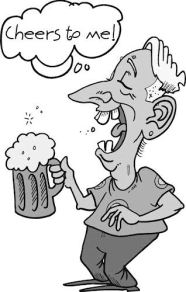 Some commercials refer to a particular brand of beer as the “high life”. I wonder why they don’t portray the real picture of a group of people that have been drinking. I’ve been surrounded by people that have been drinking, and let me tell you, it isn’t pretty and it sure isn’t my idea of the “high life”. Of course, it starts with people having fun, laughing and telling jokes. However, after a few drinks, things can take a nasty turn. I’ve had people break treasured knick-knacks after they ran into the wall, stumbling down the hallway. The laughter and joking can often turn into a huge argument that may end with a fistfight. If you are not drinking, don’t try to have a rational conversation with someone who has been, it just doesn’t work. Someone who’s been drinking isn’t rational, his or her senses and thought processes are impaired.

In the early days of our marriage, I remember the stench of beer and wine when I would get up in the morning. I would find overflowing ashtrays and glasses that had small amounts of beer with floating cigarette butts in them. I couldn’t even get my daughter ready for school until I mopped the sticky floors and cleaned the table. I have just portrayed the true picture of the “high life”, which was my world for about fourteen years of our marriage. Praises be to God, the Father, who turned my darkness into light, when my husband vowed that he would never drink again.

If you know someone who has a drinking problem, then you know the heartbreak it can cause. You may have family members who have damaged their relationships permanently, because they will not or cannot put the drinking out of their lives. One of my brothers drank heavily and lost his young wife and son, because he refused to quit drinking. Of course, he then had an even better excuse to drink, because his wife left him. He continued drinking and in his middle 40’s became a homeless man. He was in the hospital several times and the doctors warned him to quit drinking or he would be dead within a few years. I have two other brothers who each took this brother into their homes. They put their families at risk, but felt it was the right thing to do. Each brother clothed him, fed him, got him the medical attention he needed and got him a job. Each time, my brother fell back into the drinking and the families of the other two brothers were never the same again. At the ripe old age of 50, someone found my brother dead. He was sitting on the ground leaning on the wall behind a building. My heart still breaks, when I think of him sitting there alone when he died. Did his life have to end like that?

Drinking in excess can become an addiction, which one can avoid. I once heard it said, “If alcoholism is a disease, it’s the only one that can be caught from a bottle.” I don’t care what your argument is, drinking alcohol is not the best that God has for us, as his children. Drinking large quantities of alcohol can do serious, irreparable damage to the body. I know that wine is far less damaging to our body than beer, whiskey or vodka, but God warns us not to drink it in excess. Proverbs 20:1 says, “Wine is a mocker and beer a brawler; whoever is led astray by them is not wise.” The wisdom from above is far superior to the wisdom of humanity.

In closing, I’m not saying that drinking is a sin or that you shouldn’t drink. I know that wine, in moderation, is actually good for the body. My point is this: a person just doesn’t know if they are susceptible to alcohol addiction. Why would you take the risk? If you are the person who can have a few drinks and leave it at that, wonderful, enjoy! But, if you can’t stop at a few drinks, ask yourself if the risks outweigh your temporary benefits. Some of you have wives or husbands and dear children who are paying the price for your drinking happiness. Why not honor God and your precious loved ones, by caring enough to put down the bottle and pick up your loved ones. There is no answer in a bottle, only confusion and destruction. Rise up, look to the Lord God Almighty and take your life back!

Proverbs 20:1  Wine is a mocker and beer a brawler; whoever is led astray by them is not wise.

Proverbs 31:4-7  “It is not for kings, O Lemuel….not for kings to drink wine, not for rulers to crave beer, lest they drink and forget what the law decrees, and deprive all the oppressed of their rights. Give beer to those who are perishing, wine to those who are in anguish; let them drink and forget their poverty and remember their misery no more.”

Proverbs 23:20-21  Do not join those who drink too much wine or gorge themselves on meat, for drunkards and gluttons become poor, and drowsiness clothes them in rags.

Isaiah 5:11-12  Woe to those who rise early in the morning to run after their drinks, who stay up late at night till they are inflamed with wine. They have harps and lyres at their banquets, tambourines and flutes and wine, but they have no regard for the deeds of the Lord, no respect for the work of his hands.

Romans 14:19-21  Let us therefore make every effort to do what leads to peace and to mutual edification. Do not destroy the work of God for the sake of food. All food is clean but it is wrong for a man to eat anything that causes someone else to stumble. It is better not to eat meat or drink wine or to do anything else that will cause your brother to fall.

I Corinthians 5:11  now I am writing you that you must not associate with anyone who calls himself a brother but is sexually immoral or greedy, an idolater or a slanderer, a drunkard or a swindler. With such a man do not even eat.

Titus 1:7-8  Since an overseer is entrusted with God’s work, he must be blameless . . . not overbearing, not quick-tempered, not given to drunkenness, not violent, not pursuing dishonest gain. Rather he must be hospitable, one who loves what is good, who is self-controlled, upright, holy and disciplined.

I Thessalonians 5:5-8  You are all sons of the light and sons of the day. We do not belong to the night or to the darkness. So then, let us not be like others, who are asleep, but let us be alert and self-controlled. For those who sleep, sleep at night, and those who get drunk, get drunk at night. But since we belong to the day, let us be self-controlled, putting on faith and love, as a breastplate, and the hope of salvation as a helmet.

This entry was posted in Uncategorized and tagged devotion for drinking, drunkenness, Godly devotional, help for drunks, is drinking wrong, Linda L Throgmorton, living by god's word. Bookmark the permalink.