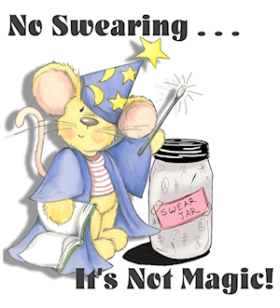 Cursing: To swear at; cursing and swearing are types of profanity; cursing involves the uttering of calling down evil in the name of God, generally as an expression of rage or frustration, while swearing is the uttering of rash or empty oaths.

I recently saw a program that was focusing on children that curse. The interview was with a particular family that had two small children. Both were boys, the oldest was eight years old and the youngest was two. The oldest boy had been cursing since he was one year old. While the little boy was talking, the news program bleeped out the cursing. It seemed like I was only hearing every other word that he spoke. The interviewer then asked the parents, who appeared to be very nice people, if their son’s cursing bothered them. They said, “No, other than his cursing, he is a very nice boy. He doesn’t give us any trouble.” The story continued to show that the youngest boy was now very fluent at cursing, because he had learned from his older brother, who cursed all the time. The camera then went to a shot of the boys in the bathtub. The mother asked the boys if it was okay to curse. The youngest one said, “It’s okay at home, but not outside.” The mother said, “That’s right, because outside, people might not like it.” I ask you, what is there to like about cursing?

I’m afraid that this view of the family is becoming more and more the reality of our cultural, moral breakdown. Parents act as if they are shocked if their small child utters a profane word, but where did the child hear it? Cursing is now saturating our television programming. Children are using bad language at school. Could it be that parents are using the very language at home that they don’t want to hear from their children’s mouths?

I grew up in the 50’s, and I can tell you that cursing was not as prevalent as it is in our society now. Punishment was certain if the word “fool” or “stupid” came out of your mouth and you didn’t even consider using the bad three and four lettered words. Honestly, until I was in my late teens, I had never even heard most of the quote “four letter” words. Unfortunately, once I got married, things started to change. You see, I married someone who used foul language, although I didn’t know it when we were dating. Hearing it consistently, day after day, I slowly found myself using the same foul words, until I became fluent at cursing. I have learned from experience, exposing yourself to something continually, will change the way you behave or speak. Thanks be to God, he has cleansed my mind, my heart and my mouth, without using a Swear Jar.

So, are the children in the television piece to blame for their language? Of course not, we all know it is a parents job to be the role model for their children. I’m not saying that the use of a “swear jar” can’t be an effective tool, but as parents, we can find a better tool. It’s our job to protect our children and teach them what is good. Children don’t even know that cursing is bad, unless someone tells them. To them, bad words are just other words that they learn to use effectively. As adults, we have absolutely no excuse. We know the difference and tell me, is there an adult alive who would actually say, “I feel so good when I hear you cursing at me.”

God’s word settles the issue of cursing for me. “Do not let any unwholesome talk come out of your mouths, but only what is helpful for building others up according to their needs, that it may benefit those who listen.” Ephesians: 4:29. Remember, what is in your heart is what will come out of your mouth or as the quote goes, “What is in the well, comes up in the bucket.” Let’s purify our hearts or wells, so that our mouths or buckets deliver blessing, love and wisdom.

Exodus 22:28
“Do not blaspheme God or curse the ruler of your people.

Psalm 10:2-7
In his arrogance the wicked man hunts down the weak, who are caught in the schemes he devises. He boasts of the cravings of his heart; he blesses the greedy and reviles the Lord. In his pride the wicked does not seek him; in all his thoughts there is no room for God. His ways are always prosperous; he is haughty and your laws are far from him; he sneers at all his enemies. He says to himself, “Nothing will shake me; I’ll always be happy and never have trouble.” His mouth is full of curses and lies and threats; trouble and evil are under his tongue.

Psalm 109:16-18
For he never thought of doing a kindness, but hounded to death the poor and the needy and brokenhearted. He loved to pronounce a curse…may it come on him; he found no pleasure in blessing…may it be far from him. He wore cursing as his garment; it entered into his body like water, into his bones like oil.

Romans 3:14
“Their mouths are full of cursing and bitterness.”

Colossians 3:8
But now you must rid yourselves of all such things as these: anger, rage, malice, slander, and filthy language from your lips.

James 3:7-11
All kinds of animals, birds, reptiles and creatures of the sea are being tamed and have been tamed by man, but no man can tame the tongue. It is a restless evil, full of deadly poison. With the tongue we praise our Lord and Father, and with it we curse men, who have been made in God’s likeness. Out of the same mouth come praise and cursing. My brothers, this should not be. Can both fresh water and salt water flow from the same spring?

Matthew 12:34-37
“You brood of vipers, how can you who are evil say anything good? For out of the overflow of the heart the mouth speaks. The good man brings good things out of the good stored up in him, and the evil man brings evil things out of the evil stored up in him. But I tell you that men will have to give account on the day of judgment for every careless word they have spoken. For by your words you will be acquitted, and by your words you will be condemned.”

Ephesians 4:29
Do not let any unwholesome talk come out of your mouths, but only what is helpful for building others up according to their needs, that it may benefit those who listen.